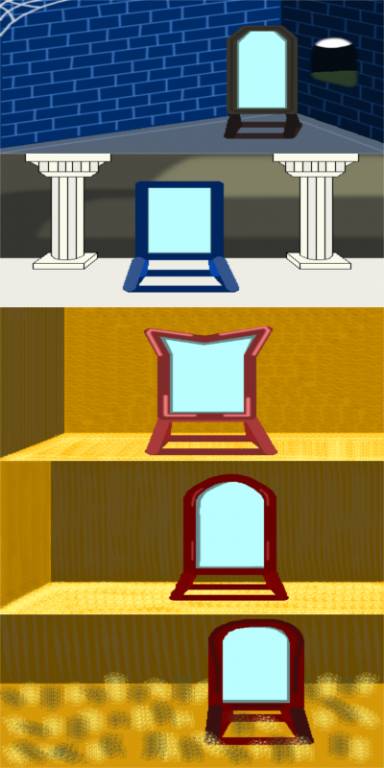 As this is the final post, I have been given permission to control the giants and Miss Goldenweek for the purposes of the party. I have also been given permission to act as if all inactive players have wrapped up their business and are aboard the ship. I also gave this ending a heading because I felt it appropriate, and I will ask about the Island Eater but hopefully my post will be okay with it included.
An Adventure Comes to an End

"Well, she did surrender," said Weapon. "Say, how old are you and what is your name?"

"I'm sixteen years old, and it's Marianne. I don't like you, but I do appreciate the mercy you showed me."

Weapon found it hard to believe, but it seemed this young-looking girl was the same age as Vivi.

The crew and their companions and allies gathered by one of the giant grey mountains, for a celebratory feast with Dorry and Brogy.

"So, you're really the same age as me?" Vivi asked Marianne.

"Sixteen? Seems so. I don't know too much about being allies or enemies... I joined Baroque Works because I liked the idea of being part of a paradise country. If it's not meant to be, however, I'd much rather become an artist."

"I've heard the officer agents are fairly tight-knit. What do you know about that?" asked Vivi.

"I've met some of them, they seem nice. But again, I'd rather not worry about all that now."

Weapon, Charles, Igaram, Jeremiah, Dorry, and Brogy bumped their mugs together with a celebratory cheer. I'm not one for alcohol, but when in Little Garden... thought Weapon.

The party went on into the night, and they fell asleep during. After waking up at noon, Weapon gave the order to be heading out. Everyone setting sail boarded the ship and prepared to leave.

"Hey Dorry, what should we do about the Island Eater?" asked Brogy.

"Well, that lot are strong, but we should probably handle it."

And handle it they did, slicing through the giant goldfish and impressing Weapon and his crew. "Goodbye, noble warriors!" shouted Weapon. "We will meet again someday!"

And with that, the Detective Pirates were off... sailing to Alabasta, to deliver Vivi, Igaram, and Marianne, and to have an answer to the questions that had raised themselves during their journey.
You must log in or register to reply here.
Share:
Facebook Twitter Reddit Pinterest Tumblr WhatsApp Email Link
Top Bottom